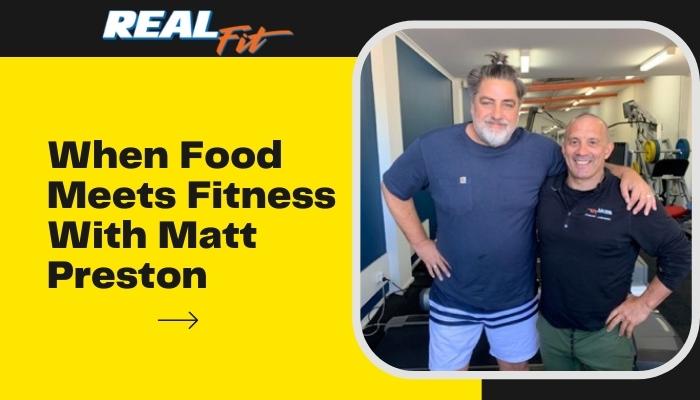 I have always been of the approach that Food should be 80% nutritional and 20% recreational and what beter way than to check out this blog artcicle whereby Matt Preston endorses my book SWEAT SWEAR SMILE and you can also check out his latest book here called Matt Preston’s World of Flavour.

I was beyond excited when Matt Preston provided a foreword to my book. I have come to know Matt through my studio, and we always have a rewarding and memorable training experience together. Our philosophies meshed perfectly, and we learn a lot from each other.

This book is awesome the graphics the images and the true World of Flavour, The recipes, myths, and surprising stories behind the world’s best-loved food.

Meet Fred Liberatore for the first time and you’ll see he is a tightly coiled ball of energy like one of those hard rubber, high-bounce balls you used to play with as a kid. His enthusiasm almost overwhelms you. Here’is a man whose whole life, whether as a wrestler, bodybuilder, or trainer, has all been about peak fitness. For him that’s his Everest, me I just want to make it up the stairs without puffing.

And it is this that makes Fred’s approach to training so refreshing. He understands that one person’s 50kg one-armed rows is another’s 5kg farmer’s walk (don’t worry Fred will introduce you to the joys of both exercises soon enough!).

He realises that everyone has their own threshold and Fred takes pleasure in helping you beat each of these thresholds, no matter how small or how big, and no matter how they morph, as they will, as you become stronger and fitter following the advice in this book.

In this colourful new cookbook, Matt brings together our favourite, flavour-filled dishes from all over the world – from carbonara and chicken korma to pot sticker dumplings and Portuguese custard tarts – with the intriguing and myth-busting stories behind them.

Some recipes are in their classic style, others have a special ‘Matt twist’, and all of them use easily found ingredients. With Matt Preston’s World of Flavour, you’ll not only have the ultimate delicious recipes to perfect and enjoy, but also their surprising histories and facts about them to share around the dinner table.

Matt Preston is an award-winning food writer and television personality. He writes a national column for the Taste Section of NewsCorp’s metro newspapers, which is read by four million Australians every week.

He is well known in Australia, and internationally, as a judge and co-host on MasterChef Australia. He is also a senior editor for Delicious. and Taste magazines.

Matt Preston has appeared in seven series of the ratings juggernaut MasterChef Australia (total worldwide audience of 180 million) as well as one series each of Celebrity MasterChef, Junior MasterChef, and MasterChef Allstars. Preston also co-hosted MasterChef: The Professionals with world-renowned chef Marco Pierre-White in 2014.

Having looked through the book myself I have certainly leant lot’s my favourite is the old school chilli con carne page 158 did you know there was a myth that Chilli was a cowboy dish invented to serve from the chuckwagons on long cattle drives. In these horse-drawn kitchens, the beans were an essential ingredient for everything, including chili. It’s a great story ill leave you in suspense to check out the truth!

You see what I love about this book is that each recipe starts with a myth about the dish which Matt dispels and replace with something closer than the truth, like unpeeling an onion, once you start digging into the history there is always another layer underneath and then another one.

Matt’s point is simple: easy, achievable recipes that never, ever, compromise the flavours or miss an opportunity to boost it to the next level, as Matt say’s “Flavour, after all, is all.

Well done Matt I’m giving the book 5 stars for a simple guy like me that feast on chicken and sweat potato most days 😊 who knows I may get Danni to cook up that Apple pie my favourite comfort food.

Thanks for your support, Matt! See you in the Gym.

Posted in News and tagged book by matt preston, fred liberatore, masterchef australia, MasterChef Australia judge, matt preston, sweat swear smile
← What is O.M.A.D. Diet and How It Can Cause Havoc On Your Metabolism?How My Mum is Defying Her Age and Going Strong At 91 →

My name is Fred Liberatore and I’m a Body Transformation Expert at REALfit, located in East Malvern in Victoria. If you’re looking for a Personal Trainer, look no further. The REALfit team will train you hard while you slim down and learn how to live a healthier lifestyle here’s proof, click here to view our Success stories.

View all posts by Fred Liberatore →